As part of this project 4 PM7000FLMs were deployed at multiple points on the Electricity North West Ltd network to validate their existing Fault Level models.

As we all move to a low carbon future, demand for electricity is set to grow, increasing fault level on the network. Respond ran from January 2015 until October 2018, to maximise the use of Electricity North West Ltd’s existing assets, reduce costs to their customers and speed up the connection of new demand and generation.

As part of the RESPOND project, Electricity North West managed their network using a Fault Level Assessment Tool (modelling software) which estimates Fault Level in near real time. Acting on these estimates, a series of 3 innovative technical and commercial techniques were deployed to reduce the fault level if necessary without the need for expensive and time consuming asset replacement.

To learn more about Fault Current and about the RESPOND Project click here to watch a short video.

“Outram fault level monitors have been installed at a total of seven Respond sites. These monitors have been installed for the purpose of network model validation of both the Electricity North West IPSA+ network model and the Schneider Fault Level Assessment Tool. The first set of results have been provided from three sites, with validation work ongoing by the project partners.”  Quote from the Electricity North West 6 monthly RESPOND Progress report, June 2016.

The PM7000FLMs generated the following results:

Outram wrote 4 reports documenting the results obtained from Fault Level monitors installed at 11 RESPOND trial sites. These can be found on the ENWL website link below in the section ‘Fault level monitoring reports’.

What results were generated?

At a couple of dissemination events run by ENWL the first set of results were discussed. Here are those FLM results and the percentage comparisons with IPSA+ model results prepared by TNEI.

This table shows that there was better agreement at two of the trial sites compared with the third.

The FLM and IPSA+ results at both Irlam Primary and Denton West showed good agreement with each other, around 3% difference. However those at Wigan BSP were significantly different. This led the teams to go back and look at the results. Since there was little room for interpretation on the results from the PM7000FLM (seen at the bottom of this page), TNEI went back to see if there was anything further to report with regards the IPSA+ model.

They suggested that ENWL check the 400/275 kV National Grid topology to make sure that it was in line with what was actually operating on the network during the measurement period. This brings to light the importance of measuring the actual Fault Level as a validation / enhancement to the modelling process.

This is what TNEI wrote on page five of their report written for Electricity North West Ltd: LCNF Fault Level Monitoring and Modelling of ENW Network, 28 April 2017.

“The comparison of the IPSA and FLM results for Wigan location suggests that the 400/275 kV topology of wider National Grid transmission network feeding Wigan Grid in the network model may not be consistent with the actual operating scheme during the period of measurements. We recommend that ENWL check the 400/275 kV National Grid topology in this area and update the IPSA model if necessary in accordance with the latest National Grid week 42 data before making another comparison with the FLM results.”

The full report can be downloaded from the ‘Fault Level Monitoring and Modelling’ section on the ENWL website:

Following the measured Fault Level results gathered across 11 sites in total, TNEI also came up with various conclusions and recommendations regards ENWL’s G74 Model (see below). These are similar observations to those made by Jon Berry of Western Power Distribution from their FlexDGrid Project.

Both sets of conclusions, that downstream contribution may be underestimated dependent on the type of load present on the network, have been arrived at following measurement of the network prospective fault levels using Outram PM7000FLMs. This highlights the importance of actual Fault Level Measurement. For further information on the work that WPD has carried out on Prospective Fault Level Monitoring and how we were also part of their £13 million Real Time Fault Level Monitoring Project, FlexDGrid, please click here.

“The results of the four trial locations consistently suggest the peak make fault contribution from ENWL’s G74 models is most likely underestimated and that the ER G74 may need to be revised to reflect the change in load mix of today. This report provides useful information by studying a variation of the G74 model having a double fault contribution compared to the one suggested by the guideline and currently used by ENWL.

It should be noted that ER G74 was developed in 1992 and since then the load mix and appliances used in commercial and industrial environments may have changed.

The industry practice is to employ the same G74 model, irrespective of the mix of load in each location or area. This is understandable as it is difficult for the distribution operators to separate consumers or areas of consumers in different categories, i.e. predominantly households, predominantly industrial.”

The following graphs show 3D and 2D representation of some of the fault level results captured during the RESPOND project. The 3D graphs, generated in our comprehensive Power Quality Software, Pronto, show Time along the x axis, Fault Level along the z axis and result Value (weighting*) along the y axis. Each 1/2hr period of the recording generates an individual result (an aggregation of all the tiny data points generated over that period from each of the relevant disturbances measured) and all of these individual ½ hourly results are then aggregated in Pronto to produce an overall short circuit current result. In the first example below, at Irlam Primary, the aggregated upstream 90ms RMS result is 11.63kA. 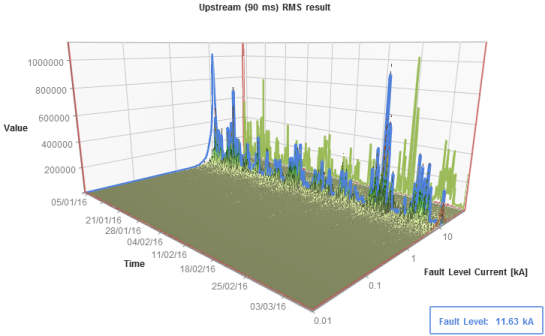 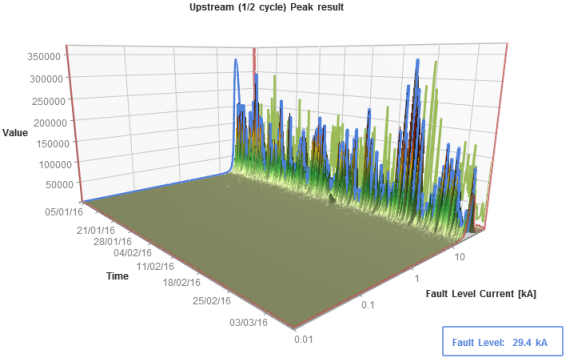 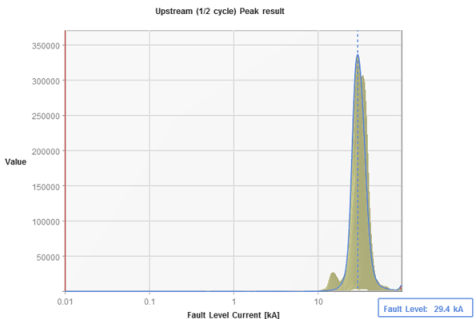 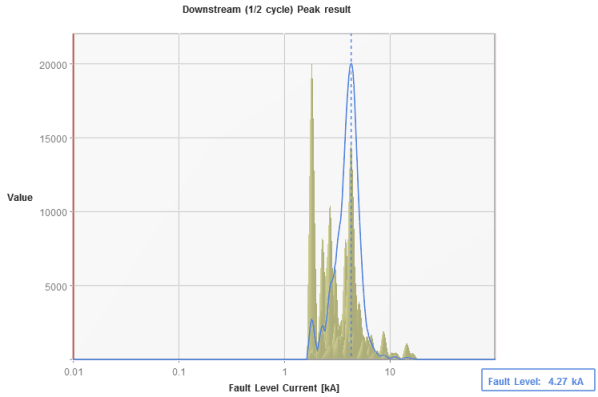 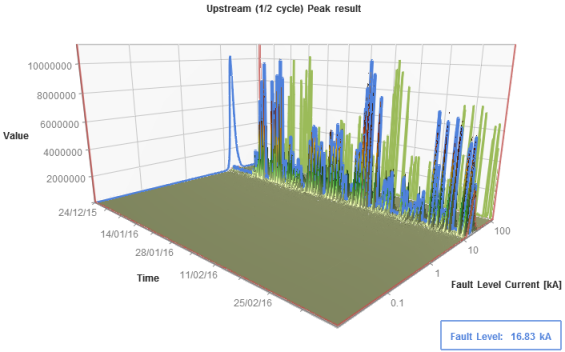 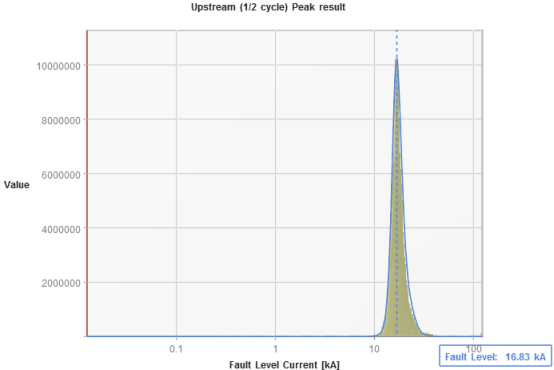 If you would like to be talked through the Fault Level results seen here or find out how the 3D graphic features work in Pronto for Windows or learn more about how you can make use of our Prospective Fault Level Monitor, the PM7000FLM, please do not hesitate to call us on +44 1243 573050 or for more contact details and a call back form, click here.

Speak to us Today

Thank you for all your fantastic efforts yesterday.

I have used data loggers in the past but they were not in the same league as the Outram equipment.

Last December when Network Rail asked me to install PQ monitoring I looked at hiring a couple of [competitor] PQ monitors. I had a Network Rail Graduate alongside me and I thought it would be a good learning exercise for him. As I began to understand the railway electrification system I realised [these] were a non-starter, so when the local electricity board ‘turned the screw’ I decided to look deeper.

I discovered Outram and when I read about your collaboration with Scottish Power I immediately realised the Outram equipment was the only one to consider. From what I have seen since yesterday morning I know I was correct in contacting your company.

Electricity North West Ltd RESPOND Project Newsletter, May 2016.
That’s a hell of a piece of Kit!

That’s a hell of a piece of Kit!

Now I’ve seen what it can do I’m going to mention it to another customer here in the UK who I know is having trouble.”

Your kit knocks spots of the bigger manufacturers.

“We captured some good stuff, these [PM7000s] really are pucker units.”

The reason I think your PM3000 is the best product in my shop is the reliability and the software. I use 5 different brands of recorders and this one by far has been the most reliable. The software updates are great, with the 60 day reminders. The layout of the software and every single function make it simple and user friendly unlike most products.

Thank you so much for attending to [my support query], and so quickly! Very impressed with these [PM3000] power analysers and the Bluetooth functionality with PMScreen and real time monitoring is sensational.

Euan Galbally, Operations Project Engineer - Supply Restoration, SSE.
I have been quite astounded at the detail the Outram Data Logger has captured.

During communications regarding the 3 PM7000TIs that Bob is managing remotely, with new data sent back to him over email every 24 hrs, he told us that he has been finding detail in the recordings he never thought he would see. “I have been quite astounded at the detail the Outram Data Logger has captured.”

Bob King, Power Phase Services, UK
….Commendable for its ease of use and portability

The Outram equipment is commendable for its ease of use and portability.

The Outram PM7000FLM and associated software proved to be capable of reliably assessing / calculating fault level from both repeated low-level steps, as well as one-off larger pulses.

I certainly will be hiring another PM7000 again. It’s an amazing piece of kit!

Stuart Turner, PCAS (Power Control and Automation Solutions) Ltd, Feb 2020
The analyser did everything that we needed. We were also impressed with how quickly it got across the US.

The analyser did everything that we needed. Rob was surprised at how easily it went on.

We were also impressed with how quickly it got across the US. It was there before we even left [the UK] and we didn’t expect that to happen.

It’s a specialised subject and the support we received from Duncan was second to none.

Chris Brookes, Simpson and Wood, UK Feb 2019
It’s shown me just how much time your software is going to save me!

What you showed me this morning and what I’ve been doing this afternoon has shown me just how much time your software is going to save me!

The Outram equipment (and associated software) makes calculation of fault level trivial in comparison to the ‘manual’ methods.

We found the Outram PM7000FLM useful for capturing data, and its software made analysis of fault-current straightforward. Other methods of data capture can be used, but would require further development to accurately give fault level information; the area where the FLM scores is its ease of use, and also that statistical analysis is applied over the whole test period, rather than at a ‘snapshot’ of one event as our analysis. This makes it less prone to noise and other disturbances on the system.