The information in this article applies to:

This article is aimed at:

This application note details the sequence required to change the battery pack in the PM7000.

To separate the PM7000 electronics from the chassis:

The battery pack is mounted inside the box just behind the handle, in a polycarbonate shell slid into position behind fixing inserts in the metalwork. The battery pack is accessible after the electronics module is separated from the chassis.

Battery packs may contain considerable stored energy even if almost discharged. This stored energy may be sufficient to melt insulation or induce burning of adjacent flammable objects.
Even though the battery voltage may be low the energy release can be considerable in event of a short circuit. Take care to avoid short circuits and to manipulate the insulated wiring with care.
Leads in the wiring harness carry the full line voltage to the PSU. Make sure all insulation remains undamaged and free from imperfections before returning the unit to service.

Carefully cut the zip ties holding the wires in position and remove them from their bases.
DO NOT CUT THE WIRES OR DAMAGE THE INSULATION – THIS WILL CAUSE THE UNIT TO BE UNSAFE. 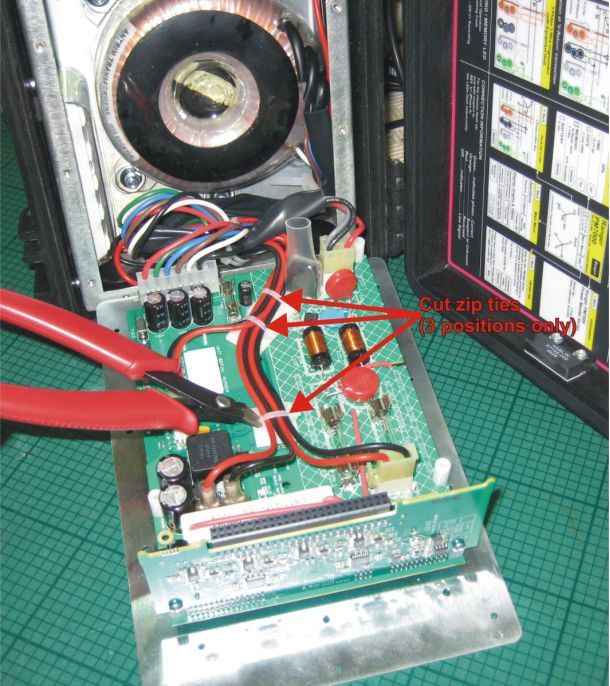 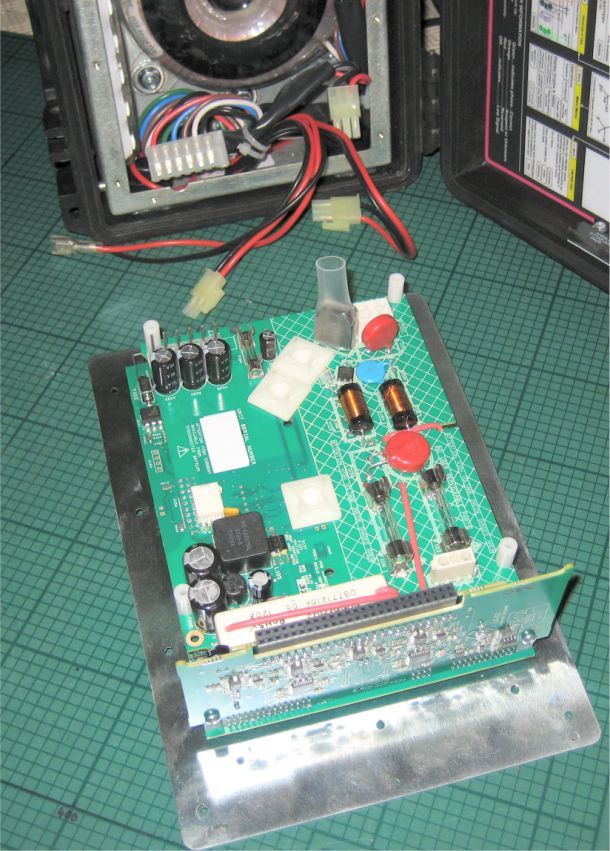 The battery is supplied as an integrated pack comprising thermal protection, internal fuse, welded leads and connector to mate with the PCB. The pack is mounted using a Polycarbonate shell that slides into position behind the inserts used to fix the front panel in position.

An existing battery pack can be removed by first carefully undoing the nylon retaining screw in the plastic shell; reserve this screw for use when reassembling the unit.
The plastic shell is removed by sliding the battery pack to the left by about 10mm – don’t go too far. A slot in the top lip of the shell allows the pack to be tilted away from the metal case so that the whole thing can then be released from the box.
Some care is required to make sure the slots in the plastic shell clear all of the obstructions around the underside of the metal lip in the top of the box – when the correct position is found the battery pack will easily come clear without needing to apply undue force.

The notes in the following subsections describe fitting a battery pack for the first time, including the fitting of cable clamps. Battery removal is straightforward reversal of this process.

Normally it is not necessary to release the large cable clamp in the corner of the box when removing the battery pack.

Assemble the battery pack into the shell

All cables apart from the battery wires are routed through the RHS cable clamp. These should not need to be disturbed when replacing a battery but the routing is shown below for completeness.

Confirm that the mains and charger cables pass neatly between the transformer case and the sidewall, passing through to the clamp to lie flat along the box wall like a ribbon cable.

Routing the wires along the PCB

The wiring harness is formed onto the PCB through 3 sticky backed cable tie bases using cable ties. The connections must now be remade and the wires carefully reattached using new cable ties as illustrated below.

Arrange the Board set below the box on its end as before (support the box to stop it falling) and remake all the wire connections. (6 connectors)

Fit 3 new zip ties to keep the wires in position, the wires must be kept as flat as possible to clear the top of the transformer in the box when the unit is reassembled. 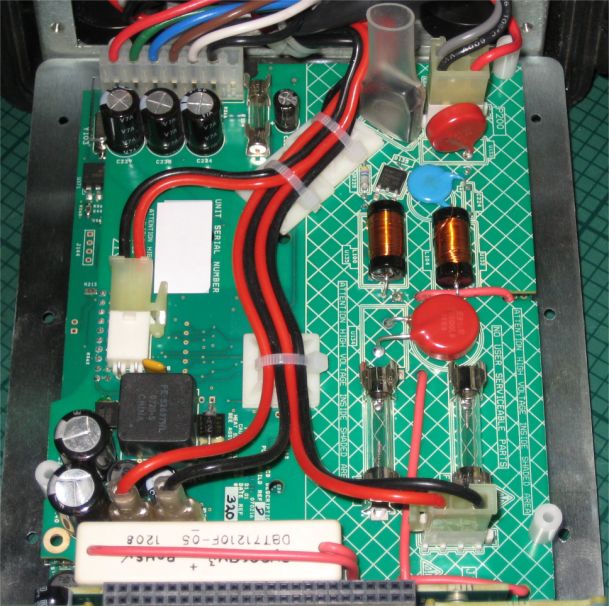 Cut the ends of the zip ties short, visually confirm the integrity of all insulation and then follow the notes on “Replacing the electronics module”

The reverse process is somewhat simpler because it is easier to push the analogue PCB home than to extract it.

Carefully raise the open end of the electronics/front panel assembly and offer the perpendicular analogue board into its card guides. 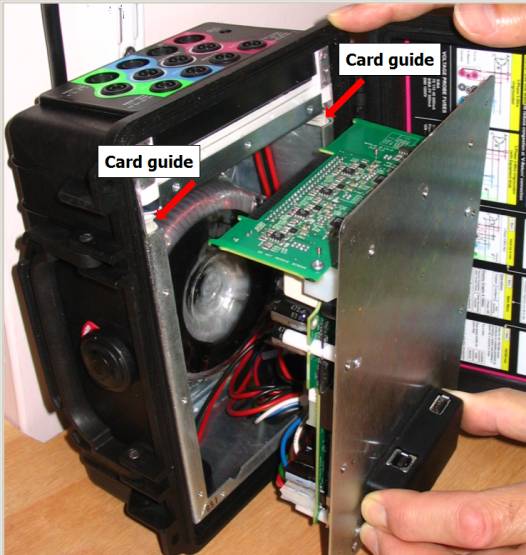 Ensure the wiring tucks neatly down into the gap beside the transformer. (If the temperature is very cold, the wires may be stiff and unbending. Take the unit into a warmer environment where the insulation will become softer and more pliable.)

Once the analogue board is about to engage it may be easier to lay the unit on its base again.

Keeping the front panel parallel with the chassis lip, lower the analogue board down its card guide, easing the other end of the module past the lip of the chassis. Do not force. The front panel will slide into place but you will be compressing the wiring into its normal position so expect a little resistance from the lower (right hand) end, and a little resistance from the left hand end as the analogue board connector mates.

Caution: The fitting sequence is best done as described below. If you choose a different sequence you may find you have difficulty in lining all the holes up. Ensure you use the correct screwdriver. Using a worn screwdriver or the wrong size may damage the screw heads.

It is a good idea to fit the four overlay screws loosely into position before tightening up the front panel countersunk screws. This way the holes in the front panel and the chassis behind will automatically be aligned to take the black screws when the overlay is fitted. 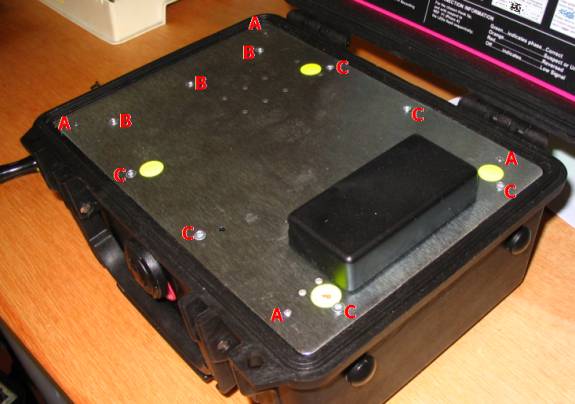 Loosely fit three (3) screws down the left hand strip (B). These attach to the vertical metal plate underneath which has a high degree of compliance and needs these screws for its final location. You may find that you need to line the front panel up on these screw holes and fit the screws before attempting to line up the front panel on the other holes.

Fit the four (4) black overlay screws loosely into their corner positions (A). Loosely fit the remaining six (6) screws into their respective holes (C).